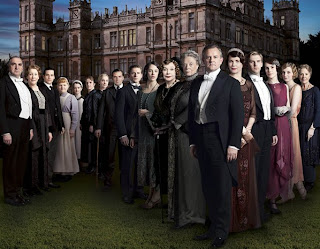 Last night was the premier for the third season, and it has started off in a delightful way. The Great War is over, and although Mary and Matthew are married--finally--the intrique has already started. And the legendary Shirley MacLaine showed up as Cora's American mother. There was some powerful and hilarious energy between her and the other legendary cast member, Dame Maggie Smith.

There is a true tenderness and sweetness inherent in both the characters and the story, which is a welcome relief from the post-modern archness which so often surrounds us. I will be at The Abbey every Sunday night for the next seven weeks. And I understand, just like Season 2, there is a Christmas special as well.

http://www.pbs.org/wgbh/masterpiece/downtonabbey/index.html
Posted by Unknown at 6:24 PM