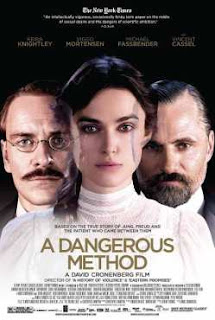 Adapted from the 2002 stage play "The Talking Cure," which was in turn adapted from the non-fiction book A MOST DANGEROUS METHOD: THE STORY OF JUNG, FREUD, AND SABINA SPIELRIEN by John Kerr, Cronenberg's film captures a sort of short-of-breath tightness that creates anxiety and tension. As a film device, it works quite well. Of course Cronenberg started out as a gore director, then horror, then horror psychology, and now he is delving into a kind of dark psychology that clearly descends from his past films. This tightness could have something to do with the fact that this film adaptation comes not only from a stage play, but that the screenwriter, Christopher Hammond, is also the playwright. On a stage, there is no luxury of expansive locales, no enormous cast of featured actors and extras (generally speaking), and no sweeping sense of story. We are focused on a few places and a few individuals.

In this case, we are focused on Sigmund Freud, Carl Jung, and Jung's first patient, Sabina Spielrien. The basis of the film is rooted firmly in fact. After treating Sabina for a while, Jung wrote to Freud in order to consult about Sabina and the psychoanalytical techniques Jung was using. They corresponded about Sabina's case and struck up a friendship. Freud considered Jung to be the heir apparent to psychoanalysis. But as the two continued to correspond and eventually meet, their differences in their personalities and experiences became more apparent to each of them, ultimately resulting in a contentious split. During this time, Jung "cured" Sabina of her emotional issues. She wished to be a psychologist, and with Jung's encouragement, she became his student and eventually his colleague.

But this is where things get a little dicey. It is now widely held that Jung and Spielrien had a sexual relationship. Her letters, discovered in 1977, mention such an affair. Letters between Jung and Freud also mention Jung's "indiscretion." But Hampton and Cronenberg do what Peter Schaffer did in "Amadeus." Did Salieri poison Mozart? There is no evidence to support or deny such a claim, but the play puts forth intriguing suppositions. As does "A Dangerous Method." Did Jung take advantage of an unbalanced young woman? Did he have a sado-masochistic affair with a patient? These are details we do not know. And I must say that although I understand the dramatic and artistic license that is being taken here, and do appreciate it on an artistic level, I regret that it colors the life, work, and legacy of Carl Jung. I will confess that I am a Jungian at heart; Jungian beliefs most closely match my own. And the fantastic work that Jung did not only in the realm of psychology, but in the realm of literature, the arts, of the study of global cultures and religions, and human development itself is a little overshadowed by this dark--and at times, lurid--fiction. The film leaves off at the beginning of Jung's personal breakdown and the start of his greatest work into the world of the unconscious. I am aware that this film is not a straight biography of Jung, but it leaves me wishing it were.

Having said that, the film itself, for what it is, works well. The period sets, costumes, and details are correct. As I mentioned earlier, this is a tale of anxiety and tension and Cronenberg directs it with an appropriate sense of anxiety and tension. He also gets the best out of his actors. Michael Fassbender plays Jung with a restrained subtlety and Viggo Mortensen plays Freud with a quiet prickliness. Here are images of the originals and their film counterparts:

But special mention goes to the talented Keira Knightley for her intense, agonizing portrayal of Sabina Spielrien: agonizing for viewers and for Knightley since she had to occupy a very dark, exhausting place for the duration of this project. Knightley had the unenviable task of being mentally unstable but all the while making complete sense. Her storyline and performance touch on issues of child abuse, sexual abuse, and the belittlement of women during that period. Spielrien became a psychologist despite--or perhaps because of--her mental instabilities. But more than that, she became a psychologist at a time when women were not thought to have the brain power to do much than play a pretty tune on the piano or to do some embroidery. Spielrien might deserve a film of her own.

Recommend? Yes, it is worth seeing for the performances and for a bit of historical background on the birth of psychology. But if you are not familiar with him, please do yourself a favor and discover the rich legacy of Carl Jung.

http://adangerousmethod-themovie.com/
Posted by Unknown at 3:55 PM