Last night, April 17, 2013, I finally got to see my beloved Sigur Ros in person! When they have rolled through Northern California in the past, the timing has never been right for me to see them, but the stars aligned this time, and their appearance at the Bill Graham Civic Auditorium in San Francisco was, for me, a highly emotional spectacle. Seen from absolutely perfect seats, I must add...I couldn't have asked for a better vantage point. 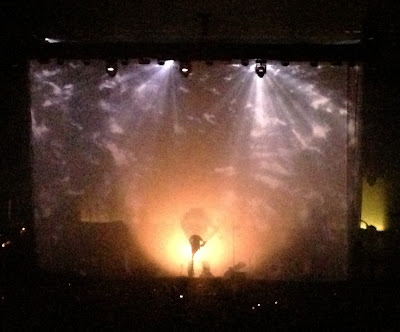 They opened the show behind a scrim, on which was projected what looked like dark moving clouds...and a backlit Jónsi was seen intently bent over his guitar sawing away with his cello bow. But the scrim dropped during the next number to reveal a massive, panoramic projector screen which was alternately raised above the band and lowered to stage level, depending on the mood and lighting effects for each song. The film and graphics projected on the screen for each song included shots and clips from that song's accompanying video, if one was created. So, for "Sæglópur," for instance, we were presented with images of the young boy swimming underwater from the official video, seen here. In each instance though, the video was not shown in its entirety, but used as a way to evoke, and was mixed with sparks, clouds, rippling water, swirling galaxies, shooting stars, smoke, glittering dust motes, or other textural elements. Some songs that did not have an accompanying video were surprisingly even more beautiful: once, on a jagged, rocky landscape, tiny figures of people appeared, holding flashing beacons, but halfway through the song, the beacons rose up, floating over us in a moment of gentle emotional release, suggesting the possible release of the soul. 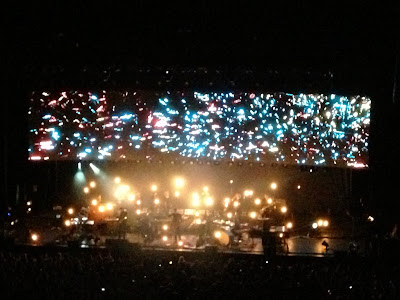 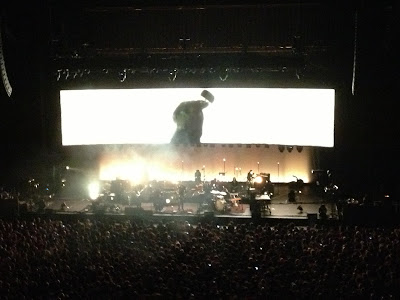 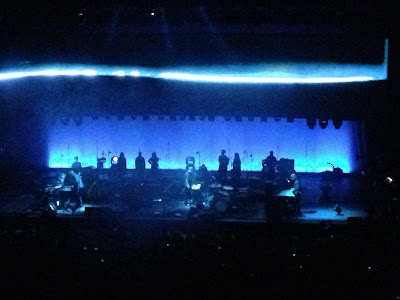 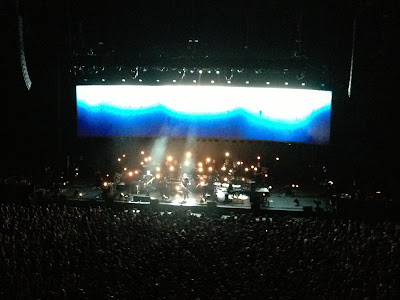 Strategically placed small golden lights on rods were scattered across the stage which, when illuminated, resembled twinkling fireflies or a sea of pulsing, glowing orbs. Special lights--sometimes emitting blinding flashes--aimed out at the audience added to the crescendos, and silhouetted the band along with the string and horn sections. 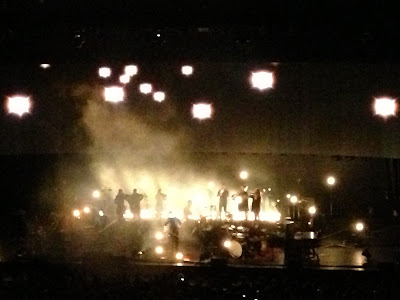 I must confess to a goose bump moment when I heard Jónsi start to sing the first song of the evening... I had to remind myself that I was actually hearing, in person, that voice that has the quality of a universal angel of compassion. His voice and phrasing are a brilliant counterpart to the often expansive, grand, shaking and shattering sound Sigur Ros can produce... a cosmic, transcendent sound that invokes at once creation and destruction. It was a marvel to experience these crescendos first hand, to hear them go on for five minutes or more, and just when one thinks the song is going to end, the crescendo gets ratcheted up so the crescendo gets a crescendo. Simply awe-inspiring.

They played all my favorite songs, like "Glósóli" and track one from their "( )" release. They even performed "Brennisteinn" as well as "Kveikur" (in English: "Quaker") from their forthcoming release of the same name. But most importantly, I got to hear the heart-stopping "Svefn-g-englar" or "Sleepwalkers" in English. This song was the first Sigur Ros composition I ever heard, more than a decade ago and it occupies a very special place in my heart. And for the gentle, lulling "Tjú" refrain (in Icelandic, the word "Tjú" is a comforting sound one makes to a baby), I was fascinated to watch Jónsi perform a little sonic trick: he raised his guitar and sang into it so the electric feed picked it up and brought it to the speakers sounding muffled and far away. Watch him do this in the video below (enlarge to full screen)... and notice the pulsing, glowing lights...


I bought a great tour tee of very soft grey jersey on which is printed, in highly reflective silver metallic, the name/logo of the band. 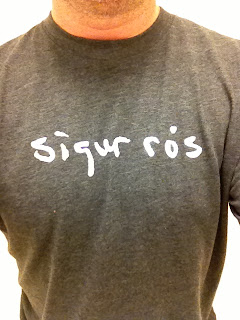 It was a lovely evening. Thanks to my friends Judy and Bianca for coming along, and thanks to my man for the tickets, an early birthday present!