To observe National Poetry Month, once a week I will be featuring lyrics of rock n' roll or pop songs that also double as exquisite poetry.

To begin with, I am featuring the work of one of the greatest poets in contemporary music, the legendary Joni Mitchell. This song, "Hejira" is from her 1976 album of the same name. It touches upon some of the great, large ideas that I often talk about here in things such as my review of "The Tree of Life." She manages to convey these large ideas by using smaller concrete specifics. The result is meaningful, moving, and profound. "I know - no one's going to show me everything/ We all come and go unknown/ Each so deep and superficial/ Between the forceps and the stone." Between the forceps that pull us into life and the gravestone that marks our burial spot... between life and death. It's all right there in that brief line. I mean, really, does it get any more poignant or beautiful than that? The song is full of breathtaking imagery too, like the wax of candles rolling "down like tears," snow gathering "like bolts of lace," and the one that makes me absolutely swoon: "white flags of winter chimneys." *sigh*

You know it never has been easy
Whether you do or you do not resign
Whether you travel the breadth of extremities
Or stick to some straighter line
Now here's a man and a woman sitting on a rock
They're either going to thaw out or freeze
Listen...
Strains of Benny Goodman
Coming thru' the snow and the pinewood trees
I'm porous with travel fever
But you know I'm so glad to be on my own
Still somehow the slightest touch of a stranger
Can set up trembling in my bones
I know - no one's going to show me everything
We all come and go unknown
Each so deep and superficial
Between the forceps and the stone

Well I looked at the granite markers
Those tributes to finality - to eternity
And then I looked at myself here
Chicken scratching for my immortality
In the church they light the candles
And the wax rolls down like tears
There's the hope and the hopelessness
I've witnessed thirty years
We're only particles of change I know, I know
Orbiting around the sun
But how can I have that point of view
When I'm always bound and tied to someone
White flags of winter chimneys
Wave truce against the moon
In the mirrors of a modern bank
From the window of a hotel room 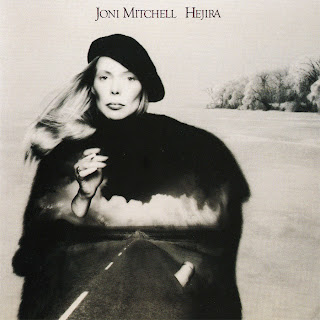 I am deliberately not including the actual song in this post because I want the focus to be on the words.

On the 23rd of this month (April, 2013), Mitchell will release GATHERED LIGHT: THE POETRY OF JONI MITCHELL'S SONGS featuring essays about her work from those who know her and specially edited lyrics by Joni specifically for this book. Visit her website for more info. 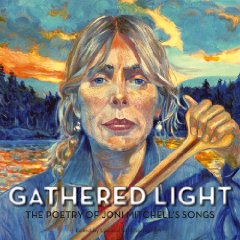 http://jonimitchell.com/
Posted by Unknown at 8:00 AM