And is there any artist who exemplifies a poetic sense in their work more than Rickie Lee Jones? She has written a mountain of majestic, awe-inspiring lyrics (and prose!) over the course of her (thankfully) long career. I had a hard time choosing one poem (song) to present, so I give you three. I am deliberately not including the actual songs in this post because I want the focus to be on the words.

There are wounds that stir up the force of gravity
A cold that will wipe the hope from your eyes
Young girl standing underneath the "L" train
Standing there, watching the trains go by ...
You think that nobody knows where you are, girl
You think that nobody knows how this feels
Alone, in a world of your own
There you are girl
The small things float
To the top of gravity
Gravity
I'm telling you where it is
Gravity

Oh, no I heard somebody
Hush up
Don't say nothing
I thought I heard someone
Well we walk when we want to go
Nobody's gonna be there
Seen somebody, somebody
Be quiet
Nobody's there ...
Nobody

I say this was no game of chicken
You were aiming your best friend
That you wear like a switchblade on a chain around your neck
I think you picked this up in Mexico from your dad
Now it's daddy on the booze
And Brando on the ice
Now it's Dean in the doorway
With one more way he can't play this scene twice
So you drug her down every drag of this forbidden fit of love
And you told her to stand tall when you kissed her
But that's not where you were thinking...
How could a Natalie Wood not get sucked into a scene so custom tucked?
But now look who shows up
In the same place
In this case
I think it's better
To face it ---
We belong together
We belong together

Once Johnny the King made a spit ring
And all the skid kids saw a very, very proud man
And he entwine her in his finger
And she lay there like a baby in his hand
Climb upon the rooftop docks lookin' out on the crosstown seas
And he wraps his jacket across her shoulders
And he falls and hugs and holds her on his knees
But a sailor just takes a broad down to the dark end of the fair
To turn her into a tattoo
That will whisper into the back of Johnny's black hair
And now Johnny the King walks these streets without her in the rain
Lookin' for a leather jacket
And a girl who wrote her name forever
A promise that ---
We belong together
We belong together

A long stretch of headlights
Bends into I-9
Tiptoe into truck stops
And sleepy diesel eyes
Volcanoes rumble in the taxi
And glow in the dark
Camels in the driver's seat
A slow, easy mark

But you ran out of gas
Down the road a piece
Then the battery went dead
And now the cable won't reach...

Well, he tried to be Standard
He tries to be Mobil
He tried living in a World
And in a Shell
There was this block-busted blonde
He loved her - free parts and labor
But she broke down and died
And she threw all the rods he gave her

But this one ain't fuel-injected
Her plug's disconnected
She gets scared and she stalls
She just needs a man, that's all 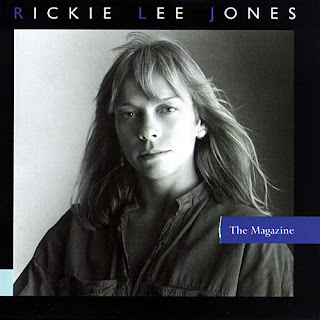 http://rickieleejones.com/
Posted by Unknown at 8:00 AM