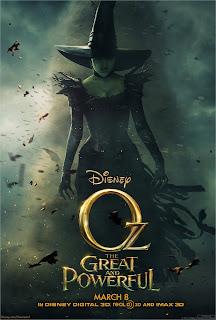 I went to this film hopeful, full of nostalgia, and with childhood memories of watching "The Wizard of Oz" on television. I was hopeful that it would not be one of those dreadful "modern re-tellings" of classic fairy tales that have vexed us of late, unnecessary films like "Red Riding Hood" and "Snow White and the Huntsman." Of course what kills these modern re-tellings is the "tween-ization" of perfectly good material. Note to producers and directors: we do not need the Brothers Grimm put through a "Twilight Saga" filter. Stop it. Just don't.

So I was more than pleasantly surprised to see that this was not a "re-telling" or a "re-boot" or a "re-anything." It is technically a prequel, but done in a way that is completely faithful to the lore of the original story. It retains a colorful lightness that is totally lost in the other current fairy tale "re-tellings." We get references to characters and places we know very well through the 1939 film version. We even get to see Munchkins! And more importantly, we get to see events unfold that lay the foundation for what happens in the '39 film. I found it very fun, very satisfying, and a bit sad that things turned out the way they did. It makes complete sense, but it left me sad for all parties involved since things did not have to take an ugly turn. But it has to be, since the '39 film version shows us the second chapter, the foundations of which are built for us here in this charming, modern prequel.

The art direction is perfect. The Yellow Brick Road looks exactly how it should along with the Emerald City and a host of familiar places and characters. The trio of women (Mila Kunis, Michelle Williams, and Rachel Weisz) were lovely and never step into cartoon territory. My only small quibble is with the casting of The Wizard himself. Now, I want to preface this by saying I like James Franco. I really do. I think he is a very good actor. But I feel he is a very 21st century actor, very contemporary... he plays a good stoner, he was marvelous in "127 Hours" but here, in something that requires a kind of classical quality, a kind of timeless manner, he just doesn't fit. He was fine, he made no mis-steps. But I can't help but think that the role needed someone a little...oh, a little more 1939... does that make sense?

Recommend? Oh, yes. It is all great fun!

http://disney.go.com/thewizard/
Posted by Unknown at 11:10 PM