…the third season of the remarkable series “Louie” on FX. 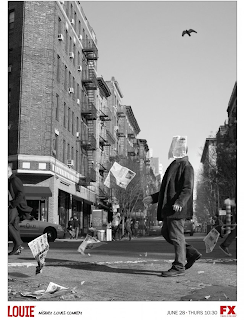 Under the (almost) complete control of comedian Louis C.K. (née Szekely--"C.K." is a phonetic spelling of his lat name), this subtle, extremely cinematic series has been compared to the work of Woody Allen. Like Woody, Louis C.K. created, produces, writes, directs, edits, and stars in this episodic show in which he plays a fictionalized version of himself. (Notice that the actual comedian is “Louis” while the show and lead character is “Louie.”) He uses the famed “Woody Allen font” (Windsor) for titles and has even hired Allen’s longtime editor, Susan E. Morse, to share some of the editing duties. 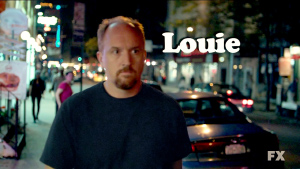 The show is ostensibly billed as a comedy but it certainly plays more like a drama. Sure, there are some humorous moments, but C.K. incorporates a tremendous amount of real-life awkwardness, poignancy, tenderness, and a bittersweet sense that simply comes from living one’s life. I must confess that this current season—there are only 3 episodes left, so hurry—is new to me. Although I knew who Louis C.K. was, and I had an appreciation for his stand-up work, I was totally unprepared for how rich and textured this unsung series is.

With a very impressive guest star roster including Chloë Sevigny, F. Murray Abraham, Robin Williams, and character actress Melissa Leo, C.K. elevates each episode into a complete experience. In one particularly memorable double episode, the always fascinating and amazingly talented Parker Posey led Louie on a wild, stunning date through Manhattan. Even without a well known guest star, C.K. and the show shines in thoughtful, tender episodes like “Duckling,” the only episode from the second season I have been able to see, in which Louie unknowingly takes a duckling, placed in his luggage by his young daughter, on a USO tour in Afghanistan.

Recommend? Yes yes yes! There can be some not-for-primetime ideas and language, so the show is not for everyone. If you are easily offended (and really, if someone is easily offended, does the mere suggestion that they are easily offended offend them?), you might want to move along and stick to something less lively, less interesting. But I think it’s marvelous.