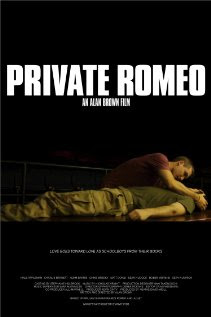 SPOLIER ALERT!
I hesitate to call “Private Romeo” an adaptation of Shakespeare’s “Romeo and Juliet.” It is something more akin to a variation on a theme.

At McKinley Military Academy, eight cadets are left behind when the rest of the school goes away for “land navigation exercises.” These eight are expected to continue as if nothing is different: rise at the same hour, line up for inspection, go to class and study their subjects. We see them in a classroom studying “Romeo and Juliet” with each cadet reading aloud the different roles from the script which neatly introduces Elizabethan English into the common, 21st century speech we have already heard from the cadets.

As one can guess, the microcosm of relationships in this small group shifts. Our Romeo, Private Singleton (played by Seth Numrich) falls in love with our Juliet, Private Mangan (played by Matt Doyle), who falls in love right back. We continue to slip back and forth between modern American English and Elizabethan English as Singleton flirts with Mangan, telling him he likes his “kicks” (shoes for those not up on current slang—sneakers in this case). But we immediately begin the classic scene where Romeo and Juliet meet for the first time.

This switching back and forth between old and modern English, and between the reality of the military academy and Shakespeare’s story, creates a peculiar phenomenon. It is clear that we are not witnessing Shakespeare’s original play or even the play with a different time and setting. Much like Carlos Saura’s classic film “Carmen,” in which the director of a flamenco dance troupe rehearsing a production of “Carmen” falls for the lead actress playing Carmen, echoing Don Jose’s infatuation for Carmen, “Private Romeo” seems to be a story within a story. One almost gets the feeling that these eight cadets have memorized the play in class and are now acting it out. But they could be acting it out consciously or perhaps they are compelled to act it out because of the budding love between Singleton and Mangan. The play gives them the ideas and language to express their feelings and reactions. Their isolation, the flip-flopping between two styles of language, and the fact that there is no one-to-one correlation of characters or roles—the eight cadets play a variety of characters young and old, male and female—gives the film a disorienting, dream-like quality. These layers are cumulative and appealing.

And the fact that there is no one-to-one correlation, and the fact that the director is not slavishly following the original script or story means that liberties are taken. Some of these liberties work, and some are confusing. But in the end, it does not matter. SPOLIER ALERT: I will say however, that one of the biggest liberties taken is that we have a—relatively—happy ending. No one dies! The young men drink water laced with, what, Vicodin or Oxycontin (?), but are free to pursue their love when they sober up. At the end we see private Mangan singing a lovely and heartfelt version of “You Made Me Love You” directly to the camera. This must be an homage to Derek Jarman—I instantly flashed on Annie Lennox singing Cole Porter in Jarman’s “Edward II.”

Oddly though, there is no real mention of homosexuality despite the fact that we are watching two young men fall in love. Openly gay director Brown says he made the film to reference the now defunct “Don’t Ask, Don’t Tell” policy of the United States military. But there is no homophobia to be seen in his film. The other cadets are driven by Shakespeare’s family conflicts between the Montagues and the Capulets. I can’t decide if I think this is refreshing (how nice that the love between the young men is accepted and treated not unlike any other love) or completely unrealistic (no homophobic slurs or violence?… in an AMERICAN MILITARY ACADEMY where young men are still trying to figure out their own sexuality and personal power? REALLY???).

The film is beautifully photographed by Derek McKane and the cast is quite good at handling all they are asked to do, including speaking Elizabethan English. The leads are very good and their falling in love is believable—as much as it can be within an iambic pentameter structure. But for me, the standout talent was Hale Appleman who played Private Neff as well as delivering a riveting rendition of Mercutio.

Recommend? Yes. It is uneven in many spots but in the end, it manages to be successful.

http://www.privateromeothemovie.com/
Posted by Unknown at 9:52 AM