...the documentary "This Film Is Not Yet Rated" in the on-going effort to stay on top of my "To See" list and the Netflix queue. 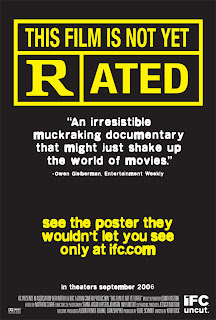 I remember when the new (at the time) NC-17 category came into use in the motion picture industry. It seemed to be a great way to distinguish which films to see, since anything interesting and independent has always been subject to censure. Before this category, any film that was thought to be stronger than an R-rated film was given an X-rating—which is ridiculous when one considers that in the waning days of the original Hays Code such great films as “Midnight Cowboy,” “Last Tango In Paris,” and “A Clockwork Orange” were all rated X. The first film to be rated NC-17 is the marvelous film “Henry and June.” But over the years, greed took center stage instead of story-telling, directing, or acting, and a film with an NC-17 rating now becomes pariah to any studio saddled with it. There is no money spent on advertising or promoting the film, most mainstream theater chains refuse to run NC-17 films, and such a film is pretty much doomed to utter commercial failure. It's all about what sells...and what sells is violence, guns, explosions, and a very limited, commercially sanctioned view of sex.

But what is not known to the general public is that the MPAA—the ultra-secretive, nearly-Fascistic motion picture industry organization—gives films these initials which, when investigated, ends up being completely arbitrary and meaning very little. The identities of the MPAA members are kept hidden and their draconian methods are never discussed with the outside world. It all sounds like some dreadful cult...except this cult not only influences and restricts its own members, it is actively working to restrict what the viewing public—you and me—can and can’t see, like some pinched-in, constipated, reproachful school marm.

In 2006, filmmaker Kirby Dick decided to infiltrate this bizarre cabal of supposedly “concerned parents of 5 to 17 year olds” in an attempt to discover who these people are, what hypocritical logic guides their decision making, and why they have the amount of power they do in the first place.

And what the film discovers is really at once shocking, expected (how film references of sensuality are excised almost always in favor of violence, which plays into the United States’ grotesque fascination with guns), and frustrating. In their entry, Wiki boils down all the salient points quite succinctly: the discovery that many ratings board members either have children 18 and over or have no children at all (typically, the MPAA has suggested it hires only parents with children between the ages of 5 and 17); that the board seems to treat homosexual material much more harshly than heterosexual material (this assertion is supported by an MPAA spokesperson’s statement in USA Today that "We don't create standards; we just follow them"); that the board's raters receive no training and are deliberately chosen because of their lack of expertise in media literacy or child development; that senior raters have direct contact in the form of required meetings with studio personnel after movie screenings; and that the MPAA's appeals board is just as secretive as the ratings board, its members being mostly movie theater chain and studio executives. Also included on the appeals board are two members of the clergy (one Catholic and one Protestant, who may or may not have voting power).

The hilarious twist to this film is that once Kirby Dick discovers their secrets, he incorporates it all into this very film which he then submits for a rating from the MPAA, the very people he just exposed!

Recommend? Yes, it is pretty entertaining but certainly has cultural and societal implications that touch nearly everyone.

http://www.ifc.com/videos/this-film-is-not-yet-rated
Posted by Unknown at 9:01 PM