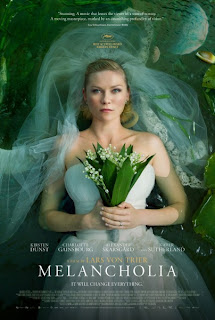 Clinical depression. An extrasolar planet slamming into earth. Two sisters, mirror versions of each other, one dark and one light…or, well, pretending to be light. Despite the messy nature of the story, this film is actually told in a very neat and tidy way, divided into two sections, each focused on and named after one of the sisters.

Section one titled “Justine” (Dunst) takes place during Justine’s wedding which unravels into an utter disaster, not only because of Justine’s crushing depression but because of the idiosyncrasies, grudges, recriminations, and anger of the guests (like any real wedding, I suppose). We are introduced to the relationship between the sisters in this section, but we also have a few fleeting, tangential mentions about a planet from outside our solar system passing close to earth.

Section two titled “Claire” (Gainsbourg) takes place a short time after the wedding when Justine has been crippled—nearly literally—by her depression. Unable to even move much, Justine is brought to Claire. While she cares for Justine, we learn more about Claire’s psyche through her reaction to the imminent destruction of earth. While Claire crumbles, and I hasten to add understandably so, Justine remains calm, even welcoming the end of the world. Because this is what depression feels like: it feels like a planet slamming into earth all the time, and when one feels that way, one welcomes the relief that the actual disaster would bring. I know this from experience. How could global extinction be any worse than utter, cosmic despair?

von Trier dreamed up this film during treatment for his own depression when a therapist said to him that those who are clinically depressed remain calm in stressful situations. Clearly he took “stressful” as far as it could go… ya can’t get much more stressful than the end of all life and the planet itself. This is in no way a spoiler since all trailers and von Trier have been up front about what happens in the film—and in fact, we see, in the first minute of the film, the result of the planetary collision, then skip backward for our story.

It’s fascinating how von Trier took a story that is by its very nature global, and reduced it to a solo, interior experience. We don’t get to see the rest of the world’s reaction to this apocalypse--or the rest of the world at all. There is no science or astrophysics involved… only the sisters. We see the end of the world at the start of the film because, obviously according to von Trier, that is not the point of the story. Justine’s depression is given as much weight as the on-coming planet. In this way, the planet is a stand-in for depression itself, slamming into and destroying life. And the planet’s name IS Melancholia. I mean, come on. There it is.

I know this all sounds absolutely horrifying and “depressing” to some—most likely those who have never really experienced true depression or depressive episodes. But trust me when I tell you: it won’t kill you. Go there, and I promise you will come back. There is a lot more to this film than just depression. von Trier has said he was channeling German Romanticism, and to prove it, the recurring crescendo from Wagner’s prelude to "Tristan und Isolde" wafts through the film. This sometimes has an unintended—or perhaps intended, considering some of von Trier’s comments about the film—comic effect, what with such an histrionic melody accompanying images of depressive agony. But somehow, he manages to explore the subject and couple it with over-the-top music without tipping into farcical territory. And the highly stylized images can often be as expansive and “romantic” as well, maybe even over-the-top. Indeed, the entire opening sequence is an achingly slow-motion series of barely-moving, haunting, breathtaking images of the end of the world. Some of these indelible images recall, in composition and execution, the work of the late Ken Russell. What saves all this from being de trop is the amazing, riveting work of Dunst and Gainsbourg. Somehow, Dunst managed to capture the total inertia of depression without being inert, or overly inwardly focused. And Gainsbourg lets Claire’s iciness crack and dissolve in a most realistic and shocking way. Both actresses are artists, as evidenced by their masterful performances.

As an aside, “Meloncholia” reminded me that we indeed have a planetary body shrieking toward us for real. The asteroid Apophis is going to pass by us in 2029… closer than our communications satellites. At that time, we will be able to calculate whether, seven years later on a return orbit, it will pass us or slam into the Pacific resulting in what would surely be a catastrophic impact. We’ll see in sixteen years whether or not we survive… stay tuned. 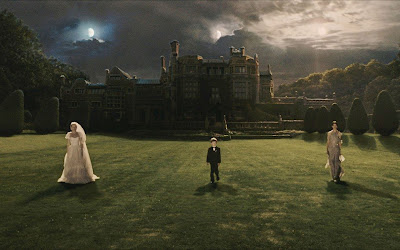 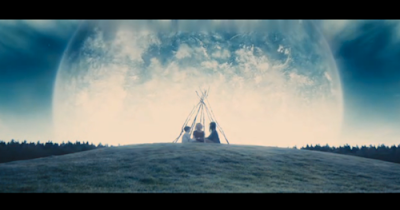 http://www.melancholiathemovie.com/
Posted by Unknown at 2:07 PM