In Memoriam: The Dakota 38 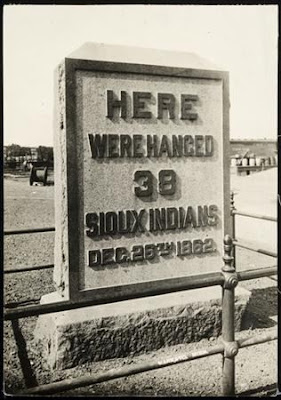 ST. PAUL, Minn (Reuters) - The day after Christmas will be somber for Dakota Indians marking what they consider a travesty of justice 150 years ago, when 38 of their ancestors were executed in the biggest mass hanging in U.S. history.

Overshadowed by the Civil War raging in the East, the hangings in Mankato, Minnesota, on December 26, 1862, followed the often overlooked six-week U.S.-Dakota war earlier that year -- a war that marked the start of three decades of fighting between Native Americans and the U.S. government across the Plains.

President Abraham Lincoln intervened in the case, demanding a review that reduced the number of death sentences. But he allowed 38 to be executed, including two men historians believe were hanged in error, even as he was preparing the Emancipation Proclamation to free black slaves in the South.

This month, in an annual event that started in 2005, some Dakota are making a 300-mile trek on horseback in frigid winter temperatures to revive the memory of this footnote in U.S. history.

"It was just a terrible trauma that they had to endure, and we continue to have to endure this generational trauma to this very day," said Sheldon Wolfchild, former chairman of the Lower Sioux Indian Community in southwestern Minnesota.

This year's ride began on December 10 in Crow Creek, South Dakota, the reservation the Dakota were exiled to from Minnesota after the executions. It ends on December 26 in Mankato, where riders will attend a ceremony to remember the hangings.

Riders travel east across South Dakota, crossing the border into Minnesota and heading southeast to Mankato. Some ride the entire route, others join as their schedules permit. Support vehicles follow them.

The ride was captured in the documentary film "Dakota 38," which won a special jury award this year at the Minneapolis-St. Paul Film Festival.

"During the ride ... it feels as close to how we might have been in a camp," said Gaby Strong, who has participated in the ride or support for it each year. "That is really what we are doing over the course of the 10 or 15 days that we are all together."

Strong, 49, who lives in Morton, Minnesota, near the site of a key 1862 battle in the U.S.-Dakota war, said the ride has helped form bonds among the Dakota Sioux, especially the young.

"It's about healing, not only just for me, but for my community," said Vanessa Goodthunder, a rider and participant each year. "We are just bringing home our ancestors. You meet a lot of new people, and I get a lot of different perspectives."

Goodthunder, 18, who is majoring in American Indian studies and history at the University of Minnesota, said the rides have helped young Dakota connect with each other and their history.

"It's your identity. It is who you are," she said.

Over the next three years, Americans will commemorate the 150th anniversary of a host of Civil War battles. Almost forgotten are the conflicts with Native Americans that occurred in the second half of the 19th century as the United States rapidly expanded west.

Few of those conflicts are well known, with the exception of "Custer's Last Stand" -- when flamboyant officer George Armstrong Custer and his men were killed by Sioux leader Crazy Horse and his warriors in 1876 -- and the Battle of Wounded Knee in 1890, which many historians consider a massacre and the end of the Indian wars.

Thousands of Native Americans, white settlers and U.S. soldiers were killed in the Indian wars. Native Americans were coerced to cede their lands and then forced onto reservations.

In the Upper Plains, that included members of the Great Sioux Nation, which comprises Lakota to the west, Nakota in the middle and Dakota to the east around Minnesota.

The seeds of the Dakota war were planted years earlier, in the 1830s, according to historians, when the fur trade that had been the basis of the region's economy since the late 17th century began to fade and land became valuable for settlement.

Under treaties in 1851, the four main Dakota bands ceded about 35 million acres of what is now southern Minnesota, parts of Iowa and South Dakota. In exchange, the U.S. pledged payments and allowed the Dakota a narrow tract of land about 10 miles wide on either side of the Minnesota River. Settlers swarmed onto the newly opened lands.

In 1858, just after Minnesota became a state, Dakota chiefs were summoned to Washington, D.C., and told they would have to give up the northern half of that narrow reserve, said St. Cloud State University historian Mary Wingerd.

The hunters pressed Chief Taoyateduta, known as Little Crow, to back a war. Some Dakota, but not all, fought soldiers and settlers in the short, bloody war in August and September 1862.

Hundreds of settlers were killed and hundreds more taken hostage in the war during attacks on forts, federal Indian agencies, cities and farms around southwestern Minnesota. Thousands of settlers fled east, fueling a statewide panic, and federal troops marched in to quell the Dakota fighters.

The U.S. was victorious on September 23, 1862, and Little Crow left Minnesota.

Afterward, more than 2,000 Dakota were rounded up, whether they fought or not. Almost 400 men faced military trials, which often lasted just a few minutes, and 303 were sentenced to die.

Lincoln demanded a review limiting the death sentences to those Dakota who raped or killed settlers. The number sentenced to hang was reduced to 38, but even in these cases the evidence was scanty, said Dan Stock, history center director at the Minnesota Historical Society.

The 38 condemned men stood on a large square gallows surrounded by soldiers. Thousands watched as a single blow with an ax cut a rope and dropped the scaffolding.

Wingerd said she could understand why the Dakota fought, but the brutal killings of settlers could not be condoned and she could not agree with people who believed that no one should have been hanged.

"We have to understand it as a huge tragedy with victims on both sides," Wingerd said of the deaths of settlers and the forced marches and scattering of most Dakota from Minnesota.

"In fact, the Dakota nation did not go to war and most of the people who were expelled from Minnesota were guilty of nothing," Wingerd said.

About 1,700 Dakota women, children and older men who did not fight were marched to a prison camp at Fort Snelling, Minnesota, where up to 300 died that winter. They were exiled to Crow Creek, South Dakota, in 1863, but some began to return to Minnesota almost immediately.

Wolfchild said he wants authorities to recognize sacred Dakota sites in the area that is now the Twin Cities and its suburbs to help heal the lingering wounds from the broken treaties, Mankato hangings and exile.

"I would like to be buried where our people originated from," he said. 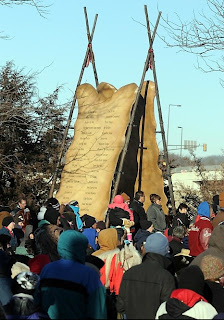 MANKATO, Minn. (AP) — Hundreds of people gathered Wednesday for the unveiling of a memorial to 38 Dakota men who were hanged 150 years ago to the day in what is the largest mass execution in U.S. history.

About 60 horse riders, including some tribe members who rode for 16 days from South Dakota, were among the roughly 500 people on hand for the dedication of the "Dakota 38" memorial, which marks a dark chapter in the history of the region and country. Dakota runners who departed from Fort Snelling also made it to the ceremony, which took place in Reconciliation Park in downtown Mankato, which is about 65 miles southwest of Minneapolis.

"Today, being here to witness a great gathering, we have peace in our hearts — a new beginning of healing," said Arvol Looking Horse, the leader of the Dakota/Lakota tribe, according to The Free Press of Mankato (http://bit.ly/WHdMop ).

The Dec. 26, 1862, mass hanging marked the end of the U.S.-Dakota War of 1862, which took place along the Minnesota River valley that fall. Following the war, 1,600 Dakota were held at a camp at Fort Snelling until being sent out of state, and virtually all other Dakota fled Minnesota.

Originally, 303 men were sentenced to be hanged. President Abraham Lincoln was aware of injustices in the men's trials, and also was urged to show compassion by Episcopal Bishop Henry Whipple. Lincoln reviewed all the cases and wrote a letter to Minnesota Gov. Alexander Ramsey, listing 39 men who should be hanged, including one who was later given a reprieve. Some Native Americans today feel Lincoln was wrong to order any of the hangings and that several of the men were innocent of any wrongdoing.

In August, Gov. Mark Dayton marked the 150th anniversary of the start of the war by asking Minnesotans to "remember the dark past" and by repudiating the actions of Ramsey, Minnesota's second governor, who said after the war that the Dakota should be exterminated or driven from the state.

A traditional drum and song group on Wednesday sang a song composed for the 38 Dakota, to the pounding of a large drum. Mankato Mayor Eric Anderson read a proclamation declaring this the year of "forgiveness and understanding."

Sidney Byrd, a Dakota/Lakota elder from Flandreau, S.D., read out in the Dakota language the names of the 38 men who were hanged. The names are inscribed on the monument, along with a poem and a prayer.

"I'm proud to be with you today. My great-grandfather was one of those who paid the supreme price for our freedom," he said. Byrd's great-grandfather was among the Dakota originally sentenced to death who were given reprieves by Lincoln. The men were sent from a prison in Mankato to one in Davenport, Iowa, where many died from squalid conditions.

The Dakota behind the new memorial and the ride and run have used the mantra "forgive everyone everything" to mark the 150th anniversary. Those words will be engraved in stone benches to be placed around the new memorial next summer.

"This is a great day, not only for the Dakota but for the city of Mankato," said Bud Lawrence of Mankato, who helped start a reconciliation effort in the 1970s.

State Rep. Dean Urdahl, R-Grove City, who co-chairs a state task force commemorating the Civil War and U.S.-Dakota War, said that while progress has been made through reconciliation and education, there remains a lack of understanding about what led up to the war and the problems that the Dakota suffered long afterward.

"Through understanding comes a healing that is still continuing today," Urdahl said.

Richard Milda, of the Crow Agency in Montana, was among a small group of riders who made the entire trip from Lower Brule, S.D., to Mankato. It's the third year he's taken part in the ride.

"I heard about the ride and was attracted to its message of forgiveness and remembrance," Milda said. 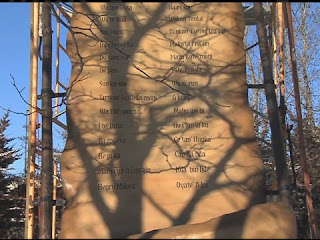 Information from: The Free Press, http://mankatofreepress.com/local/x1303500941/-Forgive-everyone-everything
Posted by Unknown at 8:00 AM