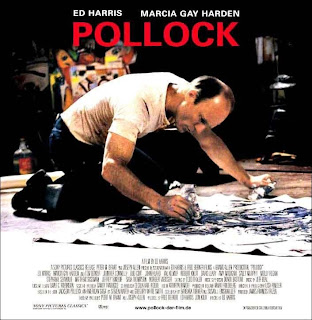 Ed Harris had been wanting to make a bio-pic of the life of Jackson Pollock for nearly ten years when all the moving parts of the pre-production phase of a motion picture came together to allow him to star in and direct "Pollock." The film opens in 1941, when Pollock was just another unknown artist in Manhattan, drunk, living with his brother and sister-in-law. Enter Lee Krasner (played by Marcia Gay Harden, a role which earned her a Best Suppoprting Actress Oscar!), the future Mrs. Jackson Pollock. We see their marriage, his rise in the art world, and his eventual artistic breakthrough of "drip paintings," all the while drinking, grumbling, smoking, and suffering what might now be diagnosed as manic depressive or bi-polar episodes.

The film looks great. It works as a period piece and of course Harris looks like Pollock... take a look below at the real Pollock dripping paint and Harris dripping paint (Harris actually did all of the art work seen in the film). 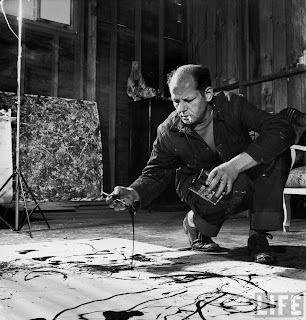 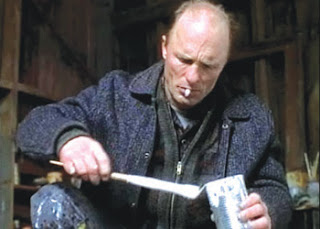 Harris and Harden are splendid as Jackson and Lee. And the film works quite well as an art history lesson. Pollock's contribution to the direction and evolution of modern art cannot be exaggerated--Amy Madigan plays Peggy Guggenheim, art collector extraordinaire, who commissioned Pollock to create a massive mural for her home in New York. However, I am puzzled by one thing: from the film, I do not know why Lee Krasner loved Pollock so and stood by him through binge drinking, affairs, and abusive behavior. Krasner was a very strong woman and seemed to be able to live a self-determined life. The film showed us nothing of what might make Pollock a lovable--or even sympathetic--character. Could she have been passionate about him simply for the art itself? It is possible that Krasner saw the revolutionary style Pollock was creating. Perhaps she believed in the art and not the man, although it is true that she promoted him fiercely. From what we are given in the film, it is hard to say. In fact, the whole film, while interesting and well done, is told with a curious sort of detachment. And I think it was a deliberate choice on the part of Harris to direct the film with a little bit of distance and a chill... perhaps to recreate Pollock's personality for us, the viewers.

Recommend? Yes, I think so. But see if you can find any redeemable quality in Pollock besides his art...
Posted by Unknown at 9:45 AM