...a little known track entitled "I Live" by Hilary.

Hilary Blake, known professionally only by her first name, was an English singer/songwriter in Los Angeles in the early 1980s. She released a four song EP in 1982 which received airplay on Los Angeles' famous KROQ radio station. "I Live" was one of those four songs.

The instrumentation is pure "1980s synthesizer" but used in a way that, at that point, few had yet tried. The racing, jangly percussion line and anxious buzzing create a tight, manic texture that was ahead of its time. The lyrics seem simple but are actually quite profound: Hilary sings of living in a house of her own making. In Jungian dream analysis, a house is a symbol for ourselves. Hilary is not trapped inside a house but is living her life as it happens. She is controlling her life, her "house." It is a wonderful, deep metaphor with universal implications since we are all living in a house of our own making, sometimes for the better and sometimes not. It is inescapable.

I live in a house with no doors and no windows
I live up in a room with no chairs and no floor
In this box, with cracks in the ceiling
I sleep on these walls
That just means I live

I live in a house
Of my own making 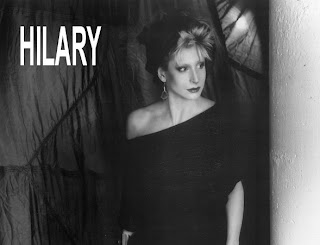 She never released any more material. In 2007, she passed away from unknown causes.
Posted by Unknown at 9:02 AM