Crows Are Doin' It For Themselves 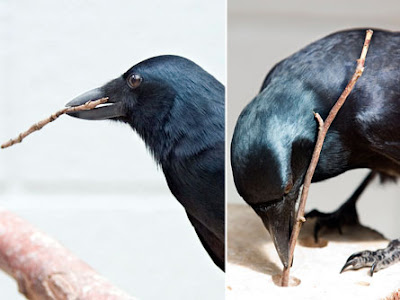 The New Caledonian crow, native to the French archipelago located in the Pacific Ocean 750 miles east of Australia, uses tools in daily life to perform tasks such as locating and retrieving food. The crows use plant material to create hooks or barbs for extracting grubs from inside logs and branches. But even more interesting, the New Caledonian crow (apparently capable of a degree of higher thinking and reasoning) is the only non-primate animal known to invent new tools to then modify existing tools in order to perform these tasks. Gavin R. Hunt and his research colleagues at the University of Auckland conducted an experiment which involved putting food in a box out of the crows' reach. They were given a stick too short to reach the food, but they could use this to retrieve a longer stick from another box. The longer stick was then used to retrieve the food.

In 2002, researchers at the University of Oxford who were observing a pair of crows named Betty and Abel noticed that "Betty's toolmaking abilities came to light by accident during an experiment in which she and Abel had to choose between a hooked and a straight wire for retrieving small pieces of pig heart, their favorite food. When Abel made off with the hooked wire, Betty bent the straight wire into a hook and used the tool to lift a small bucket of food from a vertical pipe. This experiment was the first time the crows had been presented with wire." The experiment was repeated. Out of ten successful tries, Betty bent the wire into a hook nine times.