...an artful double feature: "The Mill And The Cross" and "Nightwatching." 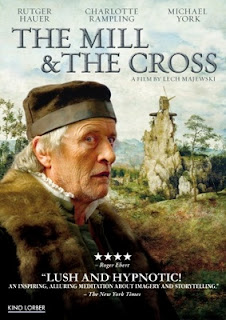 Inspired by the book THE MILL AND THE CROSS by noted art historian Michael Francis Gibson, Polish visual artist and film director Lech Majewski created his film adaptation of the same name in 2011. The mill and the cross of the title are objects within Pieter Bruegel’s masterwork The Procession To Calvary, painted in 1564, a painting which depicts Christ carrying the cross. The landscape shows this Biblical event in Bruegel’s contemporary Flanders; nearly all Renaissance painters used this updating technique.

With this famous painting as a jumping off point, Majewski shows us the lives of a dozen out of the over five hundred characters who appear in the painting. The artist Bruegel (played by Rutger Hauer) stands above the daily action of a little valley in Flanders, looking down at the ecstasy and the agony of the villagers. And above Bruegel, perched high atop an almost impossibly towering, slim rock formation, is the mill. 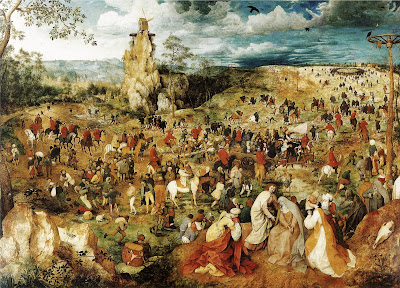 The film slowly unfolds like a dream. It is Bruegel’s painting come to life. At first, it was a little jarring to see obviously “fake” backgrounds, and “fake” skies. But it is quickly apparent that realism is not the point here. Majewski is not showing us the actuality of Bruegel’s subject; he is showing us the reality of the work itself. These are not supposed to be real clouds on the screen, they are Bruegels’ clouds. These are not real rocks, they are Bruegel’s rocks. We are inhabiting a painted world. This fastidiously designed and rendered effect (which took two years to create in post-production) is utterly magical and surreal. 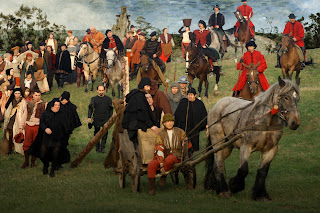 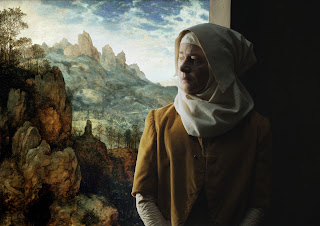 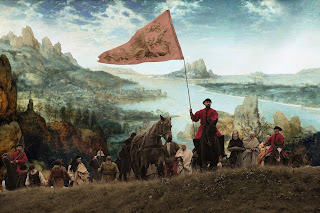 Also starring Michael York and the lovely and incomparable Charlotte Rampling as Mary (a villager and the mother of Christ), we see Bruegel “cast” his painting from the pool of people around him. He slowly plans his canvas and then gathers his models. There are several lovely goose-bump moments when, à la Sondheim’s “Sunday In The Park With George,” the villagers assemble to form the composition of the original piece.

Recommend? Yes, it is a stunning feast for the eyes… not sumptuous in material but sumptuous in substance. Especially for those who love art and art history. 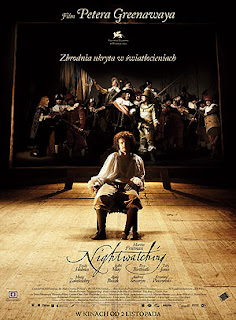 I will say at the outset that I adore Peter Greenaway’s films (“Prospero’s Books,” The Cook, The Thief, His Wife And Her Lover,” “The Pillow Book,” “ZOO: A Zed and Two Noughts,” “Drowning By Numbers”). Even his less-than-stellar efforts are far beyond what most other filmmakers are capable of. Even his missteps are glorious, unapologetic statements. Greenaway was a painter before embarking on a film career and every single thing he has created in film exhibits the sensibility of a painter, whether it is the phenomenal presentational tableaux he composes for his stories, his use of color and light, or his subject matter. Hi most recent film project is a series of films about Dutch master artists (the second film, “Goltzius and the Pelican Company” is already in the can and a film about Hieronymus Bosch is scheduled for 2016 to coincide with the 500th anniversary of the artist’s death), which sounds like it has the likelihood of being academic and a bit dry. But this is Greenaway we are talking about.

The first installment in this series is “Nightwatching,” a film about Rembrandt van Rijn and specifically the creation of his gargantuan masterpiece The Company of Frans Banning Cocq and Willem van Ruytenburch, a painting popularly known as Nightwatch. Greenaway imagines a conspiracy theory at the heart of the creation of this work of art. The men of a militia company hire Rembrandt to paint their group portrait but the artist accidentally stumbles onto a plot to murder a member of the company and the efforts of the remaining men to cover it up. Rembrandt, Greenaway fancifully imagines, accuses the men of their crime within the context of the painting using allegorical symbols, costuming them like buffoons in out-of-date uniforms. As one can guess, the reaction of the militia company is not pleasant.

But all of this is supposition and could very well be Greenaway pulling our legs. After all, he has done so many times in films that seem to be about historical personages or places (see “The Falls,” “The Coastline,” and the “Tulse Luper” series)… but we find out that such people and places were dreamt up in the fertile imagination of Greenaway. Such is the case, I suspect with “Nighwatching.” There is no historical fact to support the conspiracy theory or the fact that the men of the militia ruined Rembrandt’s subsequent career. Perhaps for this reason, the story feels a little strained and rushed. And in fact, the conspiracy story line comes to a conclusion about three quarters of the way through the film. We are left to watch Rembrandt (played with heroic dedication by Tim Freeman from the original British “The Office” and the 2005 film version of “The Hitchhiker’s Guide To The Galaxy”) flail around, take a few mistresses after his wife’s death, and then…um… just sort of be Rembrandt. It all feels a little cobbled together. The film could have been shorter (the run time is two hours and fifteen minutes) if the story or editing had been more focused.

But of course the real pleasure in this film, and the reason to see it, comes with the visuals. It ends up being two hours and fifteen minutes of a moving painting. Every frame in this film is gorgeous. Greenaway, along with his art director James Willcock and director of photography Reinier van Brummelen, expertly recreate the dark, moody canvases of Rembrandt. With chiaroscuro lighting, we get the patches of light and dark that Rembrandt, and indeed most of the Dutch Masters, are known for. With sets more like the heightened stylism of the theater than a realistic location, Greenaway’s sense of composition is, as always, impeccable; much like "The Mill And The Cross," there is a goose bump moment when the actors assemble to form the composition of the original painting. 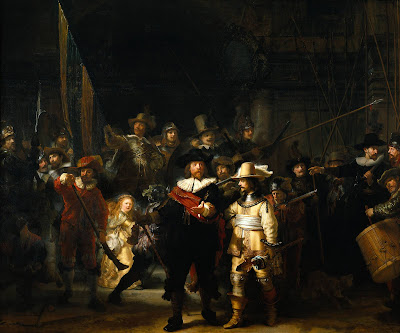 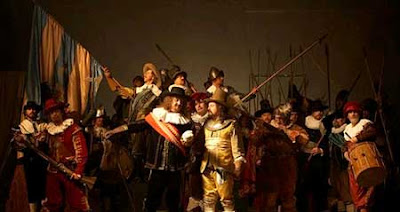 Recommend? If you are a die-hard Greenaway fan, then yes, see it. If not, I must mention that it does contain a bit of the kind of extensive nudity and profanity Greenaway is known for, so if that shocks you, stay away.