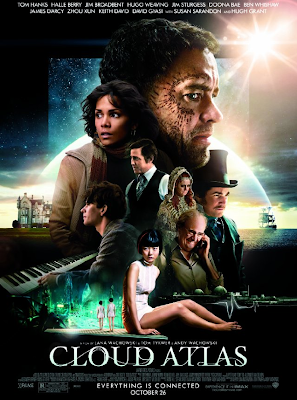 I hardly know where to begin writing about “Cloud Atlas,” the newest film from the Wachowski siblings and director Tom Tykwer. Although I did not read it, the film is based on the supposedly “unfilmable” book CLOUD ATLAS, shortlisted for the 2004 Man Booker Prize, by David Mitchell. The book tells six stories in chronological order that take place between 1849 and a far future that is revealed to be 2321. Author Mitchell says all of the main characters in the book are reincarnations of the same souls, through time, identified by a birthmark. The New Yorker called it “virtuosic” and I regret a little not reading it before it became a film. The name itself is mystically evocative. If an atlas is a book of maps, how could one ever make a map and record the position of the clouds, which are, by their nature, ever-moving, ever-changing, seemingly alive?

So the Wachowskis and Tykwer had their work cut out for them when they began working on a filmed adaptation of the novel. In fact, they all agreed that their initial meetings would be simply to see if the work could be translated into a screenplay at all. And as it turns out, it can be translated, with some brilliant and logical extra elements. They decided that the way to portray the reincarnated nature of the individuals in these six stories would be to cast the same actors, so we the audience can recognize (or in some cases of excellent make-up, not recognize) the journey and progress—or regression—of each soul. They also made a very wise decision not to tell the stories in chronological order. Right from the start of the film, the characters and events are introduced to us at a steady yet urgent pace. It is this pacing that propels the story forward and sweeps us along with it. We cut back and forth, zig-zagging through time and location, all the while anchored by these people and their interactions with one another. Never once did the narrative lag, never once did I sense the actual nearly-three-hour running time, and never once did I tire of any of the story arcs. Interweaving the timelines makes the film more immediate, more thrilling, and ultimately reinforces the ideas of karma, interconnectedness, and the impact we all have on each other, whether we know it or not (more likely not since we cannot see the “big picture” the way it is presented to us here, or as I personally believe, after we are released from our physical bodies). It also contributes to the idea that all time is simultaneous, although I am not sure that is what the Wachowskis or Tykwer were going for… but considering my own knowledge of physics, and my beliefs and experiences, that is what I get. Who knows, maybe that idea is what the filmmakers hope will sift down into our minds.

The film stars an impressive ensemble of very capable actors: Tom Hanks, Halle Berry, Jim Broadbent, Hugo Weaving, Jim Sturgess, Doona Bae, Ben Whishaw, James D’Arcy, Susan Sarandon, and Hugh Grant. All play multiple roles, with some playing different races and genders. (All were excellent and the only teeny tiny quibble I have is with some of Hanks’ English dialects which seemed a bit unformed, but he sold it with such dedication, it is difficult to complain too much.) The art direction is spectacular with the sets and costumes of each age and place fully realized, in the case of the past or present, or fully visualized, in the case of the future. The odd future-speak patois in 2321 is delightful, hard to understand, and completely logical and believable all at once. And the technology in both future sections is a marvel and reminds me of Arthur C. Clarke’s accurate quote, “Any sufficiently advanced technology is indistinguishable from magic.” The make-up ranges from amazing to sort of rubbery and not-so-good. But again, with all that we are being presented intellectually, emotionally, and visually, it seems a very small thing to point out.

There is a fascinating, subtle dichotomy at play in the feeling of the film. Although it is a German independent film, albeit distributed by Warner, there is something about it that feels sort of accessible and pop-culturish, and I don’t mean that in a good way. But when I try to ferret out exactly what is in the film or about the film that gives me that feeling, I come up blank. Is it simply that the cast is an A-List cast and not your cast of typical independent film actors? Well, Hanks and Berry might be Hollywood citizens, but many in the cast are not at all. There is something facile and slick about the veneer of “Cloud Atlas” that might be giving me this false impression, but looked at closely, the film is indeed virtuosic, spanning places, ages, cultures. It is, miraculously, a macrocosm and a microcosm, full of ideas (and metaphysical concepts) without seeming pedantic or bloated. Variety described it as "an intense three-hour mental workout rewarded with a big emotional payoff. ... One's attention must be engaged at all times as the mosaic triggers an infinite range of potentially profound personal responses." And that is entirely true. With both brains and heart, it dares to reference the big questions of existence by illustrating such ideas instead of pondering them outright. And very unlike an accessible, pop-culturish block-buster, there is an inevitable darkness: we as a species can be unfathomably cruel or unexpectedly, unconditionally kind to one another so we are not left with happy endings throughout the film. Some end up happy, some do not. There is satisfaction and there is pain. Just like life. Sometimes things turn out the way no one wants. But even then, the film reminds us, there is a pattern to it all. A beautiful, infinite pattern that includes light and dark, a pattern like moving clouds, living and breathing and vital.

Recommend? Clearly and definitely yes. I have been thinking of and contemplating this amazingly rich film for many days now. Take a look at the extended trailer below.

http://cloudatlas.warnerbros.com/
Posted by Unknown at 2:30 PM