The last show of Paris Fashion Week was like the finale to a fantastic firework display. Thom Browne's '13-'14 Fall-Winter collection is literally a testament to the power of imagination, inspiration, creativity, and vision. As we have seen for many years at Fashion Weeks not only in Paris, but in Milan, New York, and various cities around the world, the presence of a theme, the kernel of an idea is one of the key and necessary ingredients in a successful collection. This season alone we have seen inspiration come from German artists (Joseph Beuys, August Sander), Easter, cartoons, the Scottish Highlands, Edwardian ministers, David Bowie, Mongolia, the Catholic church, John Waters, clouds, and the Harlem Renaissance. But Thom Browne has proven that with keen observation, imagination, insight, intelligence, and skill, inspiration can truly come from anywhere.

What we are looking at here is Amish and Pennsylvania Dutch culture through the theatrical and artistic lens of Thom Browne and his vocabulary of men's suits and materials. Notice the squared off hats, a riff on the traditional wide brimmed flat hat seen on Amish men. The sinister looking dark glasses are a riff on the kind of octogonal glasses one often sees associated with "country" life. These elements speak to the rigidity of the Amish culture and the harshness of their way of life. And the quilting seen on nearly every piece is of course a direct reference to the traditional quilts the Pennsylvania Dutch are famous for, including a classic star pattern. And it is all presented in a seeming endless stream of classic suiting material like grey flannel, houndstooth, checks, windowpane plaids, and stripes. There are versions of the work aprons and skirts Browne has been playing with for several seasons now, but here they somehow seem absolutely appropriate, blending in with the idea of ascetic life and religious clothing.

The show itself opened with an orchestral sound of Americana and a crowing rooster while men in grey flannel bonnets acted out a traditional barn-raising, standing dazed and numbly hitting the same spot on bare wood framing with a black rubber mallet. The models entered and exited doors on the structure... doors that featured an upside down cross. Interesting since the Amish do not use a Christian cross in their practice...

And on a synchronistic note, First Lady Michelle Obama wore a Thom Browne outfit just today for the second inauguration (yay!) of her husband. 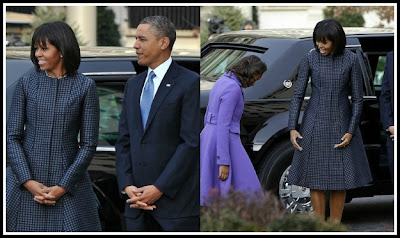