Although the British Men's Fashion Week called London Collections: Men only started last year, the English tradition of men's clothing and in particular fine men's tailoring is a very old tradition indeed. Beau Brummel ushered in what we now think of as men's fashion nearly two hundred years ago, and Savile Row has been busy making men look respectable ever since. Which is why it is fascinating to watch London Collections: Men show a mix of traditional suits and wild, youthful, artistic creations.

As with any Fashion Week, it is always interesting to see similar ideas pop up from designer to designer, completely independent of one another, and how each handles the execution of that idea. I call it The Hundredth Monkey Effect. On this note, I suppose it is not odd to see plaid make an appearance again and again since we are seeing collections for Fall and Winter of '13-'14. When the weather turns cold, it is normal to reflect on the type of clothing that will keep us warm, and plaid is iconic in that department.

While retaining a sense of English tailoring and Highland sensibility, Hardy Amies and E. Tautz showed plaid in a slightly skewed light.

E. Tautz, above, enlarged grey and orange plaid and set it on the bias for a more geometrical, modern feel... 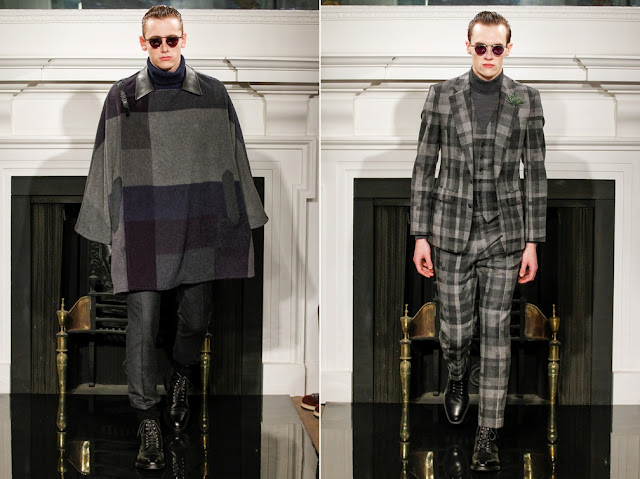 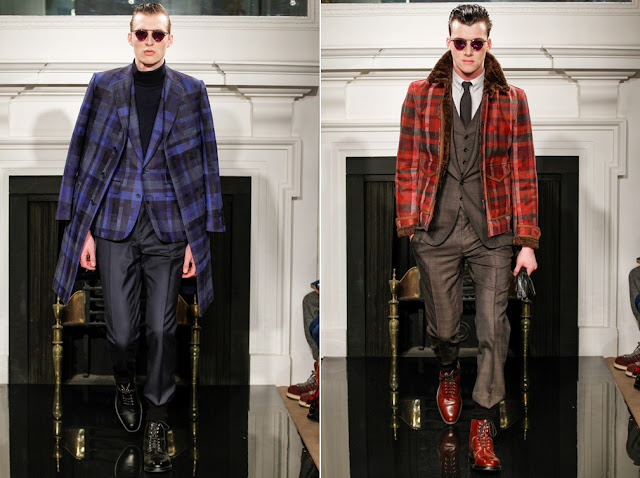 ...while Hardy Amies very subtly pixellated plaids in vibrant plum and cranberry, above.
Prints were also popular, ranging from the very unique as seen in the previous post about James Long, to the whimsical. Below, Christopher Kane hilariously prints B-movie monsters Frankenstein, The Creature From the Black Lagoon, and Lugosi's Dracula on sporty pieces. 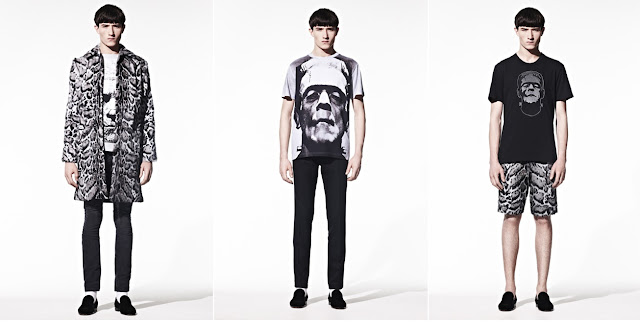 And Christopher Raeburn showed warm jackets covered in winter-white maps of the Arctic! 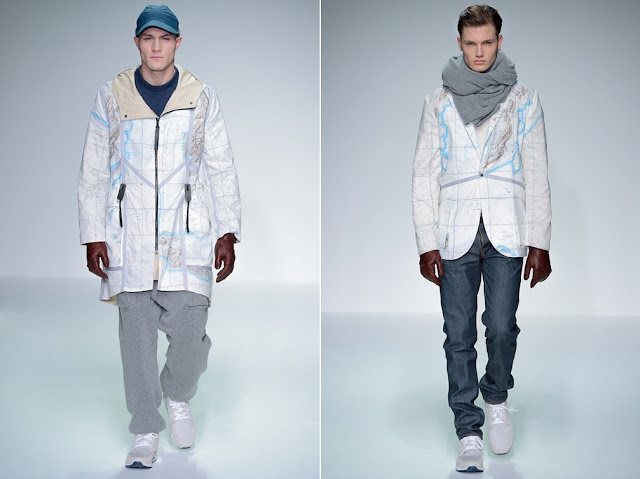 Speaking of cold climates, Topman Design channeled the ill-fated Scott Expedition to the North Pole with white polar clothes featuring touches of luxe gold metallic. Backpacks with gold embellishments also featured places on the arm straps to store your compass as well as iPhone! And there was an Arabesque print that was an echo of McQueen's quatrefoil window from a few posts ago, here. The colors unexpectedly warmed up during the show, eventually turning a deep crimson (climate change?).

MAN collective showed three designers as usual, and two standout collections were by Craig Green and AGI and SAM. Green presented a startling collection, not because of any wild colors or patterns, but because of it's strict adherence to black or white. Even the models were painted black. And many wore headpieces made from shards of salvaged lumber. The collection itself seemed cobbled together from scraps and cuttings, so perhaps it was a pro-recycling statement. Whether it was or wasn't, it had the disquieting effect of a trash heap coming to life and staggering down the runway.

The work of Ed Meadham and Ben Kirchhoff is new to me and I am glad I found them. They seem able to go to some extreme places without deconstructing themselves out of any usefulness. This collection was presented, not on a runway, but as tableaux, situated among heaps of full trash bags which Meadham says symbolizes "throwing away the sh*t of last year." Tim Blanks at Style.com noted, "Earlier this week, the designers distributed a mood booklet that told a soldier's story. The loss may well have been life, as well as love. Either way, the tristesse cast a pall over the presentation. The way the models were paired and posed suggested close relationships about to be torn apart. 'Man and boy,' Kirchhoff murmured by way of explanation. The archaic, rustic-French flavor of the clothes supported the notion it was likely the First World War doing the tearing." Among the odd sashes, culottes, and aprons were cotton vestments that had been folded and ripped, like a paper snowflake that, when opened, reveal a symmetrical pattern. Also of note: embellishments of what look to be semi-precious stones.

And finally, in a delightful fit of pique, the design trio Sibling looked at Fall-Winter and said, "You want knitwear? All right, here's your damn knitwear!" Completely unwearable but completely hilarious! (Although, that super-chunky scarf could work...)